Fruits, pecans, and berries need tender loving care to thrive and produce fruit in Central Texas.  Following these basic guidelines for soil preparation and maintenance can lead to success.  First, choose a location in full sun where the soil has good surface and internal drainage.  Be sure to give each plant proper spacing to minimize diseases and maximize production.

NO FLOWERS = NO FRUIT

Chilling hours are the number of hours below 45°F and above 34°F.  All fruit and nut trees need to be exposed to a specific number of chill hours in order to flower.  This is why it’s important to appropriately match the tree to its area.  If the tree doesn’t get enough chill hours it won’t flower properly.  If it flowers too early, a freeze will destroy the blooms.

The figures in the chart below are estimates.  Central Texas weather can be unpredictable and extreme so chilling hours will vary from year to year, so don’t put all your eggs in one basket.  For reliable production, it’s best to choose several varieties of trees.  Ask any of our friendly nursery staff to aid in proper selection! 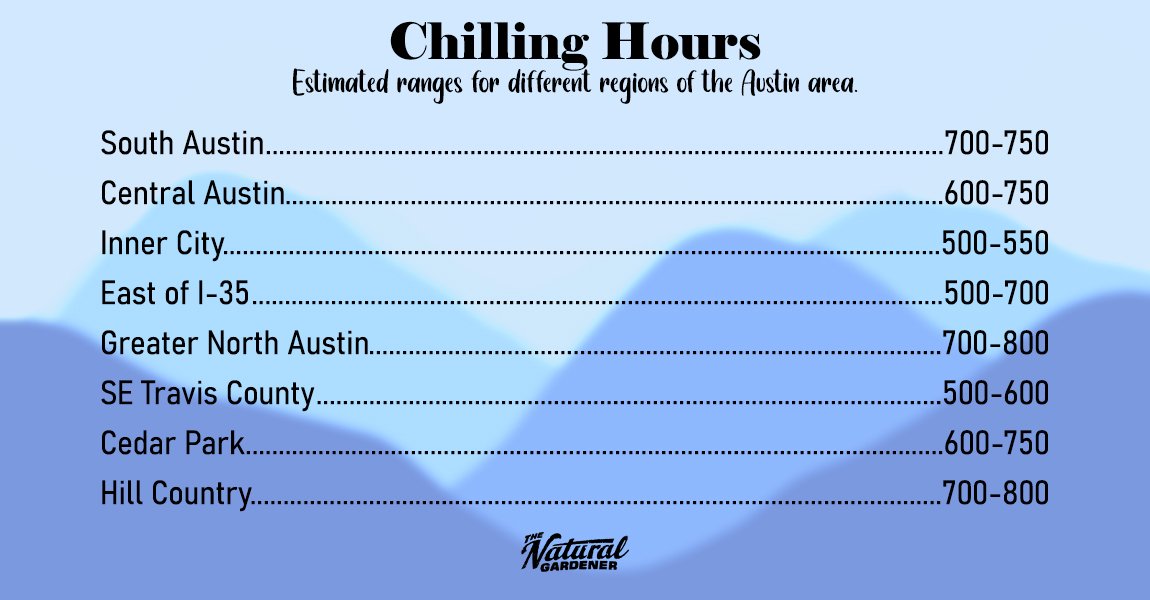 *Pecans and pears should only be planted where there is at least 3 feet of native soil, as they grow into large trees that need an extensive growing medium.

Thoroughly water the entire root zone and beyond immediately after planting.  Follow with a solution of liquid seaweed.  Always water deeply, and adjust the frequency to match the seasons.

Pruning at planting time is essential for all apples, pears, pecans, plums, and peaches.  See our specific guides:

For further pruning help, search for fruit tree pruning information online, and only consult university websites for the most accurate information.

Mulch over the root zone of all trees with a mulch of ground hardwood or pine straw.  Maintain a layer at least three inches thick, starting a few inches away from the trunk and extending beyond the dripline.

Topdress with a 1″ layer of compost annually in either spring or fall.

Fertilize most fruits once a month in March through June with a high nitrogen, all-purpose fertilizer over the entire root zone.  Only fertilize if the plant is actively growing.  Add another light application again in the fall (late October).

Do not fertilize figs, pears, or grapes on this schedule.  Fertilize grapes and figs annually in late winter.  For pears, only topdress with compost.  These three fruits do best in lean soils.

HOW TO SPRAY KAOLIN CLAY:  Mix the kaolin clay as directed in a pump-up sprayer, adding a little mild soap as a spreader/sticker.  Keep shaking the sprayer as you spray.  Kaolin clay is a wettable powder that must be kept agitated in order to remain suspended in the water.  If the white film on the tree fades due to rain, reapply.  Spray early morning or late evening only.  The goal is to maintain this coating through harvest. Remember to wash your sprayer out thoroughly after each use to prevent clogging

Control of pests such as plum curculio requires close observation and accurate timing of several different treatments and cultural practices throughout the year.  A vibrant, healthy tree can resist infestation better than a malnourished and weak tree.  Therefore, maintain the health of the tree by fertilizing, mulching, and watering according to the advice given above.  Prevent overwintering pests and disease by removing any dropped fruit.  Clean up debris around the trees (fallen leaves, weeds, brush piles, etc.) and mow closely in areas nearby to reduce the overwintering sites of the adult plum curculio.

Plum curculio, Conotrachelus nenuphar (Herbst), is a native American insect found east of the Rocky Mountains in the United States and Canada. Native trees, such as the Crabapple or the Mexican Plum, may host Plum Curculio.  It is the key fruit-attacking insect pest of peaches and other stone fruit in the southeastern United States and is also a pest of pome fruit and blueberries.

Adult plum curculios are small brownish-black snout beetles, about 1/4 inch (4-6 mm) long, mottled with lighter gray or brown markings. The mouthparts are at the end of a moderately curved snout that is about one-fourth the length of the body. Their backs are roughened and bear two prominent humps and two smaller humps. Larvae are slightly curved, yellowish-white, legless, brown-headed grubs, about 3/8 inch (6-9 mm) long when fully grown.

Life Cycle of the Plum Curculio

Plum curculio overwinter as adults in leaf litter or the soil and become active in the spring following several days of either a mean temperature above 60°F or maximum temperatures above 75°F. This time period normally coincides with the blossom period of fruit. If temperatures drop and conditions become unfavorable the adults may return to hibernation sites. Although the emergence period lasts for several weeks, 40-60% of the total emergence occurs on a single day.

The adult plum curculio emerges from its overwintering site and flies to trees to feed on buds, flowers and newly set fruit over a five to six week period. The female adult cuts a hole in the fruit with her mouthparts and hollows out a small cavity then turns and deposits an egg in the cavity. She then cuts a crescent shaped slit which extends beneath the egg so as to leave the egg in a flap of the fruit. Injury will appear as a 1/8 inch crescent shaped cut on the fruit. This prevents the egg from being crushed by the rapidly developing fruit. This results in an appearance called cat facing of the fruit. After about five days, the larvae will hatch and burrow into the fruit. The adult begins laying eggs as soon as fruit is formed on the tree – when the fruit is barely visible.

Larvae develop over 2 – 4 weeks, crawl out of the fruit, and drop to the ground (if the fruit hasn’t already fallen to the ground). The larvae tunnel into the ground and construct an earthen cell 1 – 3 inches below the surface. They pupate and may develop into adults within 3 – 4 weeks, becoming the second generation plum curculios of the year.  If it is a dry year, there may only be one generation.  Second generation adults emerge in July & August, feeding on foliage.

Fire blight is a bacterial disease (Erwinia amylovora) that can affect plants in the rose family, especially pears, but also apples, quince, pyracantha, spiraea, cotoneaster, photinia, and loquat.  Symptoms show up within a couple of weeks after bloom.  The growing tips die, turning brown to black, looking as if they’ve been burned by fire.  The dead tips wilt, forming a very typical “shepherd’s crook” symptom.  If fire blight is left untreated, it can kill the plant.  With the following management practices, however, a fire-blight infected plant can be saved if caught in time.  It is important to diagnose correctly and treat the plant as soon as possible.

Our trees often have problems with the fall (pecan) webworm in pecan and other trees.

The Trichogramma wasp is an effective biological control measure for the pecan webworm, and many other caterpillar pests.  The Trichogramma wasp lays its eggs in the eggs of the pest, before it hatches into a caterpillar.  Ideally, Trichogramma wasps should be released at the first sign of the pest moth.  For the pecan webworm, there are three times a year when moths are laying eggs:  early May, mid-June, and early August.  Ideally, release wasps two or three times, ten days apart, starting in early May. ARBICO Organics is a recommended source of beneficial insects.

A biological control called Bacillus thuringensis (B.t.) is a very specific insecticide for caterpillars. For the pecan webworm, the web must be opened to spray the leaves inside the web.  Ideally, the B.t. should be sprayed in the evening since it breaks down in sunlight.

Another control for this pest is to spray trees in the winter with dormant oil.  As the name suggests, the oil should only be sprayed in the winter.  Coat the upper twigs, branches, and trunk.